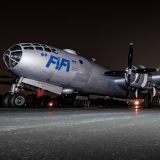 Greg Byingtonمنذ 3 سنوات
I suspect it was used as an "aggressor" aircraft at Top Gun, or something like that.
Report

jim gevayPhoto Uploaderمنذ 3 سنوات
Since some of you are curious about this plane I'll try and fill in some facts.
VFC-13, "The Saints", is flying the adversary, or "aggressor" roll in USAF lingo, out of NAS Fallon in Nevada.
You can read more about the Squadron and see photos of this actual plane at this link on page 3.

Cliff had a typo in that this plane is now part of the American Wings Museum, which has predominately Viet Nam era planes and equipment. They have a flyable OV-1 Mohawk, with another 6 parts hulks. They also fly a O-1 Bird Dog and just finished a O-2 Skymaster.
One thing interesting on the F-5 are the Swiss marking and German stencils still on the wings. I suspect they may have gotten it from the Swiss Air Force before it went to VFC-13..

Here's a link to some extra photos when the museum had it delivered.
http://www.tinfeathers.com/Museum/USA/AmerWing/VFC13/VFC13.htm

This photo was taken late in the afternoon and I was standing on a 6' snow bank from the plows. I like the light, but the background isn't as nice as I would like, but I can't do much about it from this angle. My hangar is the one with the 4 panels on the door and I have my Champ project in there.
Report

cliff731منذ 3 سنوات
Jim, you've illuminated some important findings regarding this aircraft and those Swiss markings on the wings. Yes, it might have been transferred to the Swiss from the U.S.A.F., then later returned back to the U.S.A.F.

Joe Baugher doesn't have all information on many specific aircraft and/or the dates therein and that's understandable. He is painting on a rather large canvas covering all U.S. military aircraft from essentially the beginning of military aviation in this country.

The "American Ways Air Museum" reference is Mr. Baugher's... I just quoted what he had showing on his website. Like you, I suspect it might be a typo or an "auto spellcheck" malfunction he somehow overlooked. Perhaps the museum had a name change at some point in time following Joe Baugher's entry on this aircraft.

However, the Swiss service must be in between the initial U.S.A.F. service... or it went straight to the Swiss after manufacturing (bearing the U.S.A.F. s/n)... and later returned back to the U.S.A.F. and used as an aggressor aircraft before the U.S. Navy took transfer of it. The link you provided to the photos has these remarks about it:

"This a/c is another ex-USAF aggressor with the standard USAF options. In the first two photos, it is in the USAF "new blue" scheme, with negative color stencils. In the third photo, taken on 9-7-00, it has been repainted in the same colors, but the pattern now differs, and the stenciling is now in black."

Jim, my thanks for you posting your information as it adds to the history of 74-1539. I will send an e-mail to Mr. Baugher so he might update his information, which he seems to be most grateful for the benefit of such.
Report