djames225 منذ 4 سنوات 2
I also stand corrected..I enhanced the shot from the left side where I thought it was too thin to have slats deployed, but its very visible just as it goes through the fence...unfortunately what was probably the final deciding fate was the loss of the right wing inboard flap
رد ↓•رابط ثابت•أصلي•Report

Mark Thomas منذ 4 سنوات 3
There are other videos that show this aircraft actually got airborne after going through the fence. It couldn't seem to climb very quickly though. Perhaps they lost an engine ingesting fence and trees etc. A tight turn trying to get back to the airport seems to have sealed their fate. The spotters in the videos race to the crash site and find at least one survivor. 5 on board I think.
رد ↓•رابط ثابت•Report 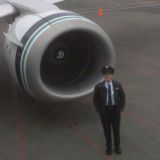 Arthur Netteler منذ 4 سنوات 1
The turn is because the Right Inner Flap was torn away. Probably because of striking the fences and several small trees.
رد ↓•رابط ثابت•أصلي•Report

Billy Koskie منذ 4 سنوات 2
To the pilots familiar with the 727, do the slats and flaps look to be configured incorrectly for takeoff?
رد ↓•رابط ثابت•Report

sparkie624 منذ 4 سنوات 3
I am not a Pilot, but an Experienced mechanic on this a/c. I am going to say no they were not. The KRUGER FLAPS were not extended, and I do not think the slats were either. He must have had his Aural Warming breaker pulled as he would have had alarms all over the place if that had been the case... That has happened on more than one occasion.
رد ↓•رابط ثابت•أصلي•Report

djames225 منذ 4 سنوات 1
Im inclined to agree sparkie..if u look at the video from the left hand camera and take a look at the leading edge of the wing just before he ingests the fence, it looks too thin to have flaps/slats extended in takeoff configuration...it seemed airborne after but he must have experienced a lot more damage from going through the fence and tail striking the roadway...another video shows he's dumping fuel before the fatal right turn.
رد ↓•رابط ثابت•أصلي•Report

30west منذ 4 سنوات 1
Sparkie, The engineer seat on the 72 was the first major airline seat for me followed by the F/O's seat a couple of years later, total time on the 72 is 3,025 hrs) before transitioning to MD-83's. After looking at the different video clips and stopping them at the appropriate time to look at wing, it appears to me that all LED's were extended. However, with the quality of the video at the stop points that I looked at, I can't say that for certain.
رد ↓•رابط ثابت•أصلي•Report

Ravee Kurian منذ 4 سنوات 2
If all the LEDs are extended, then this video would seem to suggest either incorrect thrust settings or inadequate thrust for the payload onboard. The scary thing about this accident is that the Air Safety Network (https://aviation-safety.net/database/record.php?id=20161220-0) has a video from a different takeoff of the same aircraft from October which pretty much shows almost the same thing. Seems just crazy - ran out of luck this time.
رد ↓•رابط ثابت•أصلي•Report

bentwing60 منذ 4 سنوات 9
They didn't run outa luck, they ran into 30C summer temps. It was probably 5 to 8 degrees cooler in October. It ain't about luck. If you don't know and adhere to performance limitations in airplanes, let alone jets, operating like this one was, it's only a matter of when and where. Ahh Colombia, per the last 4 engine jet crash, they couldn't carry enough fuel to get there, and said so in the flight plan, and this one was nowhere near having the runway available that it legally required. Somethin about 3rd world countries and aviation.
رد ↓•رابط ثابت•أصلي•Report

Jerry Lentz منذ 4 سنوات 2
This reminds me of the PSA flight that crashed in San Diego years ago. The B727 lost an inboard flap after a collision with a Cessna 172 and became uncontrollable.
رد ↓•رابط ثابت•Report

RICK HUGHES منذ 4 سنوات 1
I remember the PSA flight accident.I was flying Cessnas all the time.I switched to a Beech Sundowner after that.
It didn't last long when we got the Cessna Aerobat though.
رد ↓•رابط ثابت•أصلي•Report

bentwing60 منذ 4 سنوات 1
How exactly does an overloaded airplane crashin in a field, off the departure end of the runway, after takin out a fence, remind you of a mid-air collision. Oh, the inboard flap. Might be room for a Titanic or Indianapolis in the food chain of when things just don't work out. But in the case you cite, The pilots in the 727 were doin everything right. It led to TCAS. The guys we are talkin about on this thread, not so much.
رد ↓•رابط ثابت•أصلي•Report

djames225 منذ 4 سنوات 1
I am curious where you obtained the info that this craft was overloaded?
رد ↓•رابط ثابت•أصلي•Report

bentwing60 منذ 4 سنوات 1
They were overloaded for that runway, in those conditions. I won't question your credentials, but, the result is fairly self explanatory.
رد ↓•رابط ثابت•أصلي•Report

RICK HUGHES منذ 4 سنوات 3
Well now lets see here.Maybe i can give a little insight to the subject.After 25 years of working in that community i can only say this.There were a hundred things that could have went wrong in a split second.
I having years upon years of experience with the 3 holer.It is a work horse handsdown.In all those years did i ever see one aircraft crew that didn't run the numbers and obide by them.Then in the same breath i'll say that even the crews that perform in that cockpit almost entirely with there eyes shut would use a checklist. - always.
We have a 6900' runway and a 5900' runway also..
I have flown jumpseat trouble shooter quite a bit and i'll tell you this and everyone needs to think a minute.There are 3 men up front flying this airplane PROFESSIONALS and if they are like others freight lines they have 2 loadmasters ( 1 being a mechanic ) in bacanThese people don't want to die so keep that in mind.
I can't speak for their certifications from their ccountrand how strict they are.

I guess what i'm saying is this , if this shows pilot error then it really bad because it would have been made bu all 3 and that would be a very sad thing.I know here in the USA crews have self induced pressure on them especially during the holidays.
I will be interested to see what the cause was in this case and may God Bless the familys left behind and the crew RIP.

One other item here that does not pertain to this airline but to the other crews in the same country and the USA also.I personally for quite a few years had to " sign off " on the loads once we were done showing the load was secured in 2+ ways to prevent any movement in the aircraft.There were sometimes that an aircraft would show up in such questionable condition that we would have our lead mechanic do an inspection on it before we would load it and believe me we turned a few away.We would discount their fuel and let them park until they aguired another load.
I'll wait to see what the CVR says.
رد ↓•رابط ثابت•أصلي•Report

djames225 منذ 4 سنوات 0
Thanks for your insight R123154..it is funny how I asked a very credible question, since the investigation is still ongoing, and I get down-voted...I will say this thou...the temperature in October, when this exact same craft, HK-4544, took off from exact same airport, was actually 1.98 degrees C warmer.
رد ↓•رابط ثابت•أصلي•Report

sparkie624 منذ 4 سنوات 1
Without the raw information, that is an impossible answer to give. Just because the Leading Edge Devices are down does not mean the Flaps were properly configured, nor do we know how much power the engines were really producing, or what the flight crew was really trying to do. The investigators will be the ones that will have to do that.
رد ↓•رابط ثابت•أصلي•Report

bentwing60 منذ 4 سنوات 1
This one oughta still be at the top!
رد ↓•رابط ثابت•أصلي•Report

Kevin Haiduk منذ 4 سنوات 1
Wow - amazing none of the guys on the road got taken out. At least, I didn't read anything about that.
رد ↓•رابط ثابت•Report

James Simms منذ 4 سنوات 1
It looked to me on one of the videos that when the 727 took out the fence, it took out one or two of the onlookers. They were expecting it to pull up @ the last minute as in the Ocotber video but didn't this time.
رد ↓•رابط ثابت•أصلي•Report

RICK HUGHES منذ 4 سنوات 1
My info on slats on the 727 are that they are automatic when flap setting is selected.I would say this is quite accurate since it came from a long time A & P mechanic that maintained a Fed - X 727 - 200 for many years at our local airport.
They have retired the 27 and so has my mechanic friend.His imput for this was to keep the stall speed where they needed it.
I'm quite positive and confident about my information and if it's true then they had not set the flaps.If this is wrong ( which i doubt ) please let me know.It's hard for me to believe the missed setting the flaps.No checklist used ??????
رد ↓•رابط ثابت•Report

sparkie624 منذ 4 سنوات 1
I can't really say that they are automatic, but they are a product setting based on the Flaps. There is not a Slat setting from the cockpit, but controlled from the flap handle.
رد ↓•رابط ثابت•أصلي•Report

Colin Seftel منذ 4 سنوات 1
Since it's a freight aircraft the investigators will also be looking at the cargo loading plan in case the C/G was too far forward.
رد ↓•رابط ثابت•Report 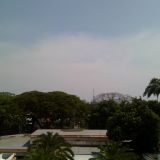 Jim DeTour منذ 4 سنوات 1
Looked misty so maybe rained earlier. You have to watch out for staged cargo gaining wait after a rain. Showing up to pickup staged cargo it can be best to inspect asking about weather and at least rechecking the weight of some or all cargo. Some bulk fish crates are big square buckets good for holding in water and fish juices. If they were misconfigured for takeoff it might explain why they didn't shutdown rejecting the takeoff because speed was good but the darn lift wasn't there.
رد ↓•رابط ثابت•Report

bentwing60 منذ 4 سنوات 0
Jim, that darn pesky lift, It's in the performance charts. They didn't use em!
رد ↓•رابط ثابت•أصلي•Report

sharon bias منذ 4 سنوات 0
Sad that so many people were around the aircraft as that could goof up the crash site investigation. And why were so many people at the end of the runway anyhow? Are flights out of this airport rare? I'm sure the photo's and video's will help the investigation, but those folks could have also been killed.
رد ↓•رابط ثابت•Report

Jesse Carroll منذ 4 سنوات -4
Is it just me or does it appear that with that many videos around, it means somebody won't be getting their Happy snorts or injections for Christmas!
رد ↓•رابط ثابت•Report