Perth-London flights announced by Qantas for 2018

تم الإرسال منذ 5 سنوات
Announcing the new non-stop service, Qantas chief executive Alan Joyce said the 17-hour flights would be the third-longest passenger flights in the world. Mr Joyce said the airline's new 787 Dreamliner aircraft would be used on the route, which would operate from the domestic terminal at Perth Airport from March 2018. The announcement came after the WA Government ended an impasse with Qantas and agreed to help fund an upgrade of the terminal. Premier Colin Barnett said the state would… (www.abc.net.au) المزيد...

Colin Seftel منذ 5 سنوات 2
The article quotes Alan Joyce as saying it will be the third longest passenger flight, but other articles (eg http://www.aviationwa.org.au/2016/12/11/qantas-confirms-direct-perth-london-flights-from-march-2018-using-terminal-3/) give the distance as 14 498km which pips Dubai-Auckland EK449 (14 200km) as the longest distance. However, the scheduled duration for EK449 is 17:25, so that may be longer in time, but even then the new route will be the second and not the third longest.
رد ↓•رابط ثابت•Report

Wolfgang Prigge منذ 5 سنوات 2
I've not found any seat map of the Qantas Dreamliner yet, but from some other news articles it looks like they will keep the original 8 across seating. It would really be a torture to sit 9 across for 17 hours, so I do hope for those planning to use this flight that this true.
رد ↓•رابط ثابت•Report 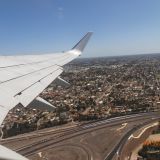 Qantas will commence the first regular passenger service to directly link Australia with Europe, with the announcement today of direct Perth-London services from March 2018, using its new, yet to be delivered Boeing 787-9 Dreamliners.

This is at the extreme range limits for the aircraft, so Qantas will need top fly with restricted loads during some parts of the year.

matt jensen منذ 5 سنوات 1
We haven't forgotten the 1979 takeover of the US Embassy.
رد ↓•رابط ثابت•Report

Mike Hindson-Evans منذ 5 سنوات 3
Errr, shurely shome mishtake?
Why would a non-stop flight from UK to Oz stop in Iran?

Did some muppet post to the wrong forum or have I dropped into the wrong parallel universe this morning?

Wolfgang Prigge منذ 5 سنوات 2
No Mike, it's not what it appears to be. Someone at flightaware had decided that a story about a deal between Boeing and Iran Air was a duplicate squawk to this report of the new non-stop flight to Europe by Qantas. By moving the story here, all the comments were moved too, that's why we have these completely out of context comments now. To make it even more confusing, the supposedly duplicate squawk was removed, but not the comments.
رد ↓•رابط ثابت•أصلي•Report

drdek منذ 5 سنوات 2
Nor the brutality of the puppet we installed called the Shah.
رد ↓•رابط ثابت•أصلي•Report

The agency quoted Farhad Parvaresh, the chairman of Iran's flag carrier, as saying that the 10-year deal included 50 Boeing 737 aircraft and 30 777 planes.

Wolfgang Prigge منذ 5 سنوات 3
Gee, how can a story about a deal between Boeing and Iran Air be a duplicate Squawk of a Qantas announcement concerning direct flights between Perth and London?
رد ↓•رابط ثابت•أصلي•Report